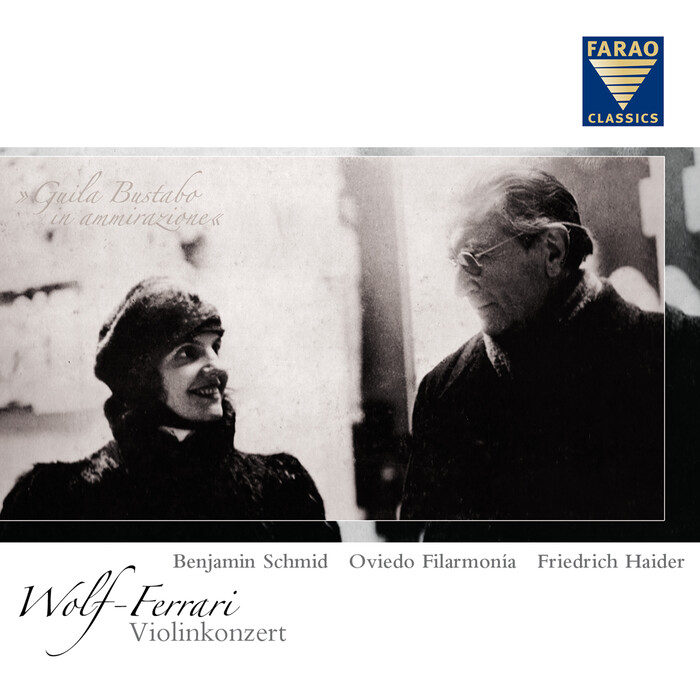 Violinist Guila Bustabo and Conductor Oswald Kabasta, who premiered the Violin Concerto, are pictured the cover of this new release from Farao Classics.

If you mention the composer Ermanno Wolf-Ferrari to lovers of classical music, they will probably say “Oh yes, he wrote comic operas like Il Segreto di Susanna and I Quattro Rustegi.” That is true, but there is a lot more of this composer’s remarkable music to be discovered, as you will learn when you listen to a terrific new recording of Wolf-Ferrari’s Violin Concerto from Farao Classics. If you are a member of Classical Archives, you can listen now.

The recording features a terrific performance by violinist Benjamin Schmid and the Oviedo Filarmonia, conducted by Friedrich Haider. This album might also serve as your introduction to the adventurous Vienna-born violinist Benjamin Schmid, who has made it his mission to perform lesser-known concertos by Gulda, Muthspiel, Szymanowski, Lutoslawski, Reger and others. His new recording of the Wolf-Ferrari Concerto makes a strong case for why this concerto deserves to be heard more often.

This new Farao release also offers an opportunity to hear the young Austrian conductor Friedrich Haider conduct the Oviedo Filarmonia, a Spanish orchestra he has been affiliated with since 2004.

Ermanno Wolf-Ferrari was born in Venice in 1876 to a German father and an Italian mother. As a young man, he studied composition with Josef Rheinberger in Munich and then began to compose. In addition to several comic operas, he wrote at least one major, verismo-influenced opera, i gioielli della Madonna, which was performed at the Metropolitan Opera in 1926. Later in his life he taught composition at the Mozarteum in Salzburg. He died in Venice in 1948.

At first consideration, Wolf-Ferrari’s life seems similar to that of Ferruccio Busoni (1866-1924). Both men wrote music that walked on the artistic borders of Italy and Austria/Germany. Yet musically speaking, Busoni was the more Germanic of the two and Wolf-Ferrari, the more Italian. Busoni’s music often seems post-Wagnerian, while Wolf-Ferrari’s seems to pulsate with a Mediterranean warmth.

About the Violin Concerto in D, Op. 26

The four-movement concerto was first performed on January 7th, 1944, by the American violinist Guila Bustabo with the Munich Philharmonic Orchestra conducted by Oswald Kabasta.

The opening notes of the first movement are arid and somehow reminiscent of Sibelius’s great Violin Concerto. But soon Wolf-Ferrari’s warm voice emerges.

As the liner notes that accompany this wonderful recording tell us . . .

Why this inspired violin concerto has since led a marginalised existence, all but completely neglected in everyday concert life, is incomprehensible.

Thanks to Friedrich Haider, the German-Italian Ermanno Wolf-Ferrari has experienced something of a renaissance over the past few years. Ever since the conductor came across a score by this composer in a London second-hand bookshop, he has been fascinated by this music and become an ardent champion of the almost forgotten master.

“Wolf-Ferrari’s violin concerto contains simply everything a violinist could desire,” says Benjamin Schmid. When he was given the score by Friedrich Haider, he was immediately captivated by the work. “With Wolf-Ferrari, you have the feeling that he is singing every second of the time. One brilliant melodic idea follows the other in all four movements of the violin concerto. It has enchantingly beautiful inspirations and an endless wealth of nuance, and is subtle in form and magnificently orchestrated as well.”

If you are a member of Classical Archives, you can listen and discover this wonderful concerto now.