The Murderous Music of Carlo Gesualdo 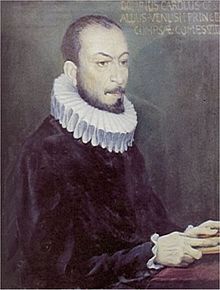 Lots of famous musicians have not had “warm and fuzzy” personalities. Brahms was reportedly a grump who insulted people at parties. Toscanini, adored for his politics and humanism, screamed at orchestral musicians. And Wagner . . . well, let’s not talk about Wagner.

But none of them can touch the Italian composer Carlo Gesualdo (1566-1613). In 1590 when he discovered his wife Donna Maria in bed with her lover Fabrizio Carafa, he stabbed them both to death on the spot. According to legend he left the room, then went back and stabbed them a few more times just to be sure they were really goners. Would you believe, he was found not guilty? (Maybe he applied the, “I just gotta be me” defense.) And would you also believe that it took him only a few years to find another woman who would marry him? He did. Her name was Leonora d’Este, the daughter of the famous family. It seems that Gesualdo was a desirable mate because he was a prince and had a castle. But Leonora reportedly got the creeps and spent much of her time visiting her wealthy relatives. Good idea. In his later years, Gesualdo exhibited signs of growing mental illness and nobody wanted to be around him.

Yet . . . he composed remarkable music that you can listen to on Classical Archives. His six books of madrigals are nothing short of extraordinary, filled with extreme chromatic writing that makes them sound modern, even today. They actually sound a bit . . . nuts. Could they provide a glimpse into the mind of a murderer? Could be. Why not listen and decide?