Accordion lovers have been waiting a long time for a bona fide classical accordionist to come along. And now, it seems we have one. She is Ksenija Sidorova, a charismatic young Estonian virtuoso. DGG has just released her new album, “Accordion,” in which she and a small ensemble play arrangements of music from Bizet’s Carmen. Somehow, an accordion turns out to be a fine instrument to convey the varied moods of Carmen, from exotic to languid. You can enjoy the album now on Classical Archives if you are a subscriber.

You can also hear Ms. Sidorova on other recordings here on Classical Archives, including “Canción“ by guitarist Miloš Karadaglić and “The Violin” by violinist Nicola Benedetti. But Ms. Sidorova’s new CD from DGG is clearly her breakout album. She steps out of the ensemble, claims the solo parts and makes a very big impression.

Why So Few Classical Accordionists Until Now?

Over the years, some people have said that the accordion is not an instrument capable of meeting the demands of most classical music. (Remember that once upon a time, people were saying something similar about the guitar.) In the past, the roadblock has probably been due to the nature of the accordion itself – at least in the arrangement of keys on the traditional “piano” accordions that have been used in the past.

A little explanation is in order.

A piano accordion is so called because it has a piano-like keyboard that is played with the right hand. (Note that there are other kinds of accordions too, such as the all-chromatic models with nothing but buttons, popular in Eastern Europe and Germany; Ms. Sidorova does not play one of those.)

Then on the other side of the bellows where the left hand does the work, most piano accordions have 120 round buttons. And in the past, the chords that those buttons triggered represented an impediment to the range of repertoire that could be played on an accordion. They were set up to play simple chordal accompaniments to the melodies that were being played by the right hand. (You might derisively call them “oom-pah-pah” accompaniments but then again, similar accompaniments were used by Verdi and Bellini and many other composers, not only by polka bands.) If repertoire stretched too far into early 20th-century chromaticism or 12-tone music, piano accordions were left behind.

But the piano accordion that Ms. Sidorova plays is different. With the shift of a lever, the 120 buttons played by her left hand can be made to play not chordal accompaniments, but a full range of single notes. How Ms. Sidorova has learned to master that bewildering forest of 120 different buttons is amazing. But master it, she surely has. Suddenly, the accordion (at least the kind of accordion that she plays) can now take on a fuller range of classical repertoire. Maybe her next CD will feature works by Webern or Berg. I would love to hear a recording of her playing an arrangement of The Rite of Spring. Boy, could she ever do it.

Not to complicate matters, but I also need to mention the “shifts” that are small switches that lie just about the piano-like keyboard. You will notice in some of the videos that when Ms. Sidorova depresses one of them, the sound of the instrument changes, or the range suddenly moves up or down an octave. That is because those levers can block off or unblock different banks of reeds inside the instrument. If you think this sounds odd or gimmicky, consider the fact that organs can also change their sound by blocking or unblocking different pipes. It’s pretty much the same thing.

Here’s how Ms. Sidorova explains how her new kind of accordion works and plays some Schnittke.

About the New “Carmen” CD 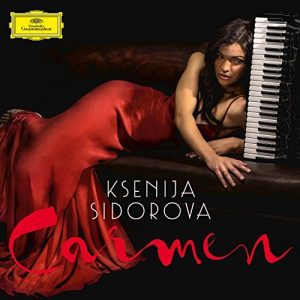 You’ll hear most of the familiar melodies from Carmen – the Habanera, the Seguidilla, the Toreador Song, the duet between Don Jose and Micaela, and lots more.

The album offers so much listening pleasure at the same time it places Ksenija Sidorova in the spotlight. Given her virtuosity, musicality and great appeal, she is likely to occupy center stage for a long time to come.