Arnold Schoenberg’s A Survivor from Warsaw . . . Classical Music You Should Know During Holocaust and Genocide Awareness Month 2022 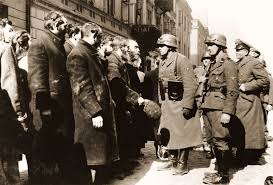 A scene from the Warsaw Ghetto

Every year the United Nations holds a month of programs that commemorate the holocaust. This year’s theme is “Memory, Dignity and Justice,” and you will want to attend some of the U.N.’s online programs, starting on January 20th.

The U.N. is not the only organization that will be hosting lectures and other programs in the coming month. Across the country, religious institutions will do so too. We would also like to call your attention to a series of events that are being presented by the remarkable Wolfsonian institution at Florida International University (FIU) in Miami Beach, starting on January 25th.

A Remarkable and Harrowing Work to Explore this Month

It is A Survivor from Warsaw, Op, 46 for male narrator, male chorus and orchestra by Arnold Schoenberg. The text was written by the composer.

For your listening, we have selected a recording from the Classical Archives library (available for immediate listening now if you are a Classical Archives member) that features the Vienna Youth Choir and the European Community Youth Orchestra, conducted by Claudio Abbado. The narrator is the esteemed actor Maximilian Schell.

About A Survivor from Warsaw

This work was composed by Schoenberg during the years when he lived in California and was premiered in 1948.

The work narrates the story of a survivor of the Warsaw Ghetto. One day, the Nazi authorities hold a roll-call of a group of old and sick Jewish men to determine who would be deported to death camps. When they men moved too slowly, and the Nazi guards beat them. Some men fall to the ground and the guards assumed they are dead. The Nazis then demanded another roll call. The guards repeatedly made the men to count faster and faster until they finally broke into the sung prayer Shema Yisrael.

Here is the text by Arnold Schoenberg:

I cannot remember everything. I must have been unconscious most of the time.

I remember only the grandiose moment when they all started to sing, as if prearranged, the old prayer they had neglected for so many years – the forgotten creed! But I have no recollection how I got underground to live in the sewers of Warsaw for so long a time.

The day began as usual: Reveille when it still was dark. “Get out!” Whether you slept or whether worries kept you awake the whole night. You had been separated from your children, from your wife, from your parents. You don’t know what happened to them … How could you sleep?

The trumpets again – “Get out! The sergeant will be furious!” They came out; some very slowly, the old ones, the sick ones; some with nervous agility. They fear the sergeant. They hurry as much as they can. In vain! Much too much noise, much too much commotion! And not fast enough! The Feldwebel shouts: “Achtung! Stillgestanden! Na wird’s mal! Oder soll ich mit dem Jewehrkolben nachhelfen? Na jut; wenn ihrs durchaus haben wollt!” (“Attention! Stand still! How about it, or should I help you along with the butt of my rifle? Oh well, if you really want to have it!”)

The sergeant and his subordinates hit (everyone): young or old, (strong or sick), guilty or innocent … It was painful to hear them groaning and moaning.

I heard it though I had been hit very hard, so hard that I could not help falling down. We all on the ground who could not stand up were then beaten over the head … I must have been unconscious. The next thing I heard was a soldier saying: “They are all dead!”

Whereupon the sergeant ordered to do away with us. There I lay aside half conscious. It had become very still – fear and pain. Then I heard the sergeant shouting: “Abzählen!“ (“Count off!”)

They start slowly and irregularly: one, two, three, four – “Achtung!” The sergeant shouted again, “Rascher! Nochmals von vorn anfange! In einer Minute will ich wissen, wieviele ich zur Gaskammer abliefere! Abzählen!“ (“Faster! Once more, start from the beginning! In one minute I want to know how many I am going to send off to the gas chamber! Count off!”)They began again, first slowly: one, two, three, four, became faster and faster, so fast that it finally sounded like a stampede of wild horses, and (all) of a sudden, in the middle of it, they began singing the Shema Yisrael,

Many years ago I had the privilege of singing in the male chorus for a performance of this work at the Kennedy Center.