Classical Music You Should Know . . . Amahl and the Night Visitors (opera) with libretto and music by Gian Carlo Menotti (1911-2007)

LISTEN NOW if you are a member of Classical Archives

Amahl and the Night Visitors is an opera that the American composer Gian Carlo Menotti created for the NBC Opera Theatre. Thought to be the first opera created for television, Amahl  was first performed and telecast on December 24, 1951. 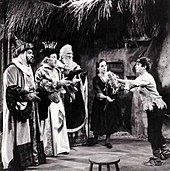 In the years since, Amahl has become a favorite. The sweet, lovingly composed music strikes the right note for listening during the Christmas season. And the story is a Christmas classic in its own right.

Set at the time of Christ’s birth, Amahl tells the story of a crippled boy, Amahl, and his poor mother. At the beginning of the opera Amahl tells her that he has seen an immense star in the sky. She does not believe him – Amahl is prone to tell tall tales. But then Kaspar, Melchior and Balthazar – the three kings – arrive, carrying rich gifts for a child king they are seeking. They are following the star to Bethlehem and ask for shelter with Amahl and his mother, who welcome them into their shack to spend the night.

After the kings have gone to sleep, the mother attempts to steal some gold from them. She is caught in the act by one of the kings’ servants, but King Melchior forgives her and gives her the gold so she can care for Amahl. Then Amahl offers to give his crutch to the child the kings are seeking, and a miracle happens. He is healed and can run and dance. At the end of the opera, Amahl leaves with the kings to seek the Christ child.

The opera is sweet as can be, filled with beautiful melodies that emerge as arias, ensembles and a dance for local people.

If you don’t know Amahl and the Night Visitors, you should. It is an American classic and could become a favorite for you too, especially during the Christmas season.