Members of Classical Archives may click on the album cover above to listen to The Tribute, a piece that Mark Polishook composed for two violins and cello. .

From the New York jazz scene to creating musical robots and 21st-century piano teaching – we catch up with the super talented jazz pianist, Mark Polishook.

My passion for jazz began as a teenager living close to New York City, where I was lucky enough to hear many of the great pianists of the time: Erroll Garner, Count Basie, Earl Hines, Thelonious Monk, Bill Evans, and Ahmad Jamal, to name only a few. But having a passion for jazz and choosing it as a profession are two different things! That’s because, talent and love aside, there’s the ever present question: how to transform music from a passion into a career?

Fortunately, my first mentor in jazz, Floyd “Floogie” Williams, steered me to the New England Conservator where I studied with Jaki Byard, one of the great jazz pianists of the time.

After finishing my undergraduate degree, I freelanced as a jazz pianist in NYC. That’s a chapter in of itself!  But, after some years of freelancing, I decided I wanted to teach at university level. To do that I had to return to school to earn a doctorate, in my case in music composition. I’ve since written string quartets, a few pieces for orchestra, and a lot of chamber music. And there’s also Seed of Sarah, my short opera that was made into an award-winning internationally-distributed film.

But, with all of those things going on I also become interested in electronic music. 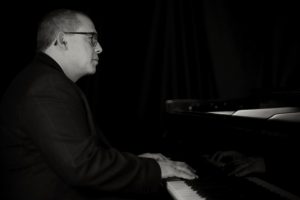 A jazz player who’s into electronic music. Tell us more!

I’ve given seminars on composing and improvising in electronic music in North America, Europe, and Asia, and I’ve also taught courses in the subject at universities where I’ve also designed project studios. Of course I’ve also created a lot of my own music which I call “electronic things.”

My interest and experience with music technology began when I played with David Clayton Thomas, the lead singer for Blood, Sweat & Tears, who were one of the seminal jazz-rock bands from the 60s. It was while I was playing in David’s band that I first came across a synthesiser. I didn’t realise at the time just how much the instrument was going to influence me.

For example, I don’t plan out what I’ll play in my improvised solo piano concerts – I just play. That’s because my experience with electronic sound led me to think less about repertoire and more about timbre and texture. Or, to simplify that, what catches my attention at the piano is the sound of the instrument, which is exactly what all fascinates me with “electronic things.”

All of this came together during a year I spent as an artist-in-residence in the computer science department at Aarhus University in Denmark.

Computer science and music. How does that work?

As an artist-in-residence in the Aarhus University Computer Science department, I had the support, and freedom to work on, really, anything I wanted to. So the project – though really it was an experiment – that I decided to build was an installation in which dancing Lego robots, who had their own websites and email addresses, made music from emails sent to them by an audience. Of course, the robots wrote back to everyone who sent emails to them too!

The installation eventually ran 24/7 non-stop for six weeks at the Aarhus Public Library, and it was also live streamed on the internet. Audience members, whether in the library or elsewhere in the world, could have two-way conversations with the robots through email. Meanwhile, software I wrote converted human-robot email interaction into the ambient music to which the robots danced. And, of course, the robots read all of the conversations – so the audience could hear the interaction too.

How 21st century! What are you up to at the moment?

I began with the piano, then with synthesisers, and then with robots who used technology to connect to people at a distance, which, in turn, led to my current teaching practice: offering piano lessons on Skype to students in places like Hong Kong, Australia, New Zealand, Iran, Europe, Africa, the United States, and London.

I also write a blog on how it feels to improvise – rather than explaining improvisation through music theory, scales, and chords. When we know what something feels like we usually can do it. But when we know how something’s made, well, that’s often all we know! To generalise, I help students to acquire experience. From that, they usually can draw their own lessons.

I returned not long ago from China where I spent five months concertising and giving improvisation master classes to university students. Meanwhile, I recently built an electronic music studio in my house with synthesisers, software and fun gizmos. That, in turn, all complements the Steingraeber-Phoenix grand piano that’s central to my teaching and playing.

Finchcocks is an amazing place. It has a core group of world-class piano instructors with decades of experience between them. All teaching and learning at Finchcocks’ are in a beautiful, rural setting with gorgeous B&B accommodations with dining included. It’s a remarkable, inspiring environment – for learners and teachers alike.

Find out more about Mark and his teaching at https://www.polishookpiano.com/ and visit Finchcocks at https://www.finchcocks.com/ to see the range of programs and amenities it offers.