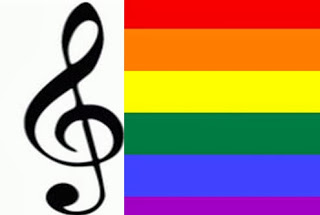 Most people today seem to care less and less about whether other people are straight, gay, transgender, or transsexual. Perhaps the growing acceptance of same-sex marriage is one factor behind the trend. Another could be the growing public affection for certain gay and lesbian celebrities. Or it could be because same-sex couples, many of them wonderful parents, are now ingrained in our communities.
That’s my straight man’s perspective anyhow. I’m not sure how gay and lesbian people feel exactly, but I’d like to think that from their side of the equation, they are learning to live alongside straight people (with all our good and bad attributes) too.  Let’s face it. Both straight and gay people are variously wonderful, awful, charming, responsible, flaky, considerate, irritating, honest, crooked – and we’re all in this together.
Toward a New Musical Aesthetic
If we are entering a vibrant new time when people (both gay and straight) care less and less about other people’s sexual preferences, how will that affect the way we listen to music?
It might come as a surprise to any younger readers of this blog, but as recently as five years ago, many people thought of musicians’ sexuality first when trying to appreciate or understand them.
One example? Toward the end of his life, several articles and biographies of Vladimir Horowitz (1903-1989) began to report that he had had male lovers. Even at the time, all I could think of was, “If he can play the piano the way he does, who the hell cares?” But in the ethos of those days, people seemed to need to categorize artists as gay or straight. I also remember that back in the 1970s, some opera fans seemed to enjoy telling each other that one very famous Italian tenor was “really gay.” “Really” in that context meant secretly, concealably, and shamefully. And “everybody knew” that Leonard Bernstein was “a bisexual,” whatever that meant exactly. He was married, he had kids and he had affairs with men which his wife, as far as we know, accepted. It’s hard to sum up that kind of situation with a single word like “bisexual.”  It’s kind of like saying that a Ferrari is a “compact car.”
Then there were the composers. Francis Poulenc? Gay, first and foremost, of course, in the public consciousness. Ned Rorem? Ditto. Aaron Copeland? Yup. Benjamin Britten? You better believe it. And when rooting around in the historical past, people found out that poor old Tchaikovsky had gone to great lengths to conceal his homosexuality. He even married a student of his to try to quell the “suspicions.” I wish we could wake him up today and tell him that it’s okay, now please be happy and enjoy your life and compose more great music.
I don’t know about you, but I find that the new cultural climate has freed my ears so that I can do a better job of listening to music. Perhaps it only reveals some deep-seated prejudices on my part, but I find that I can listen to music composed by Ned Rorem, for example, and just hear more of the music coming though when I am thinking less about his sexual stuff. I think that I can now think of him more as a man who writes music. Ain’t that the way it is supposed to be?
But Several Questions Are Even More Important
If the way we hear music and think about music history is getting scrubbed clean of old prejudices, who is going to rewrite the music criticism that was written over the last, say, 100 years? Do we need to have a burning of the old books, or do we simply need to understand that they, like Huckleberry Finn, contain good stuff that can still be mined, despite offensive elements?
Who is going declare that prejudicial thinking is over and that we need a new way of hearing and thinking about music?
Perhaps most important of all, who will now write about music, and think about it, in the new way that is necessary? I don’t think it will be I, I’m just not smart enough. Maybe it will be you? If so, I wish you good luck. We are entering an exciting new age in which we will all hear in a newer, bigger way.