Pure Music or Human Document . . . a new way to listen to music

Today I’d like to suggest a new way of listening to music. I’m proposing that while we listen to music, we can understand it better by evaluating how well it functions in two opposing categories:
On One Extreme Is Robert Schumann, Composer of Human Documents
You clearly hear Robert Schumann’s voice everywhere in his music. You hear it in the disarmingly simple pieces that start off his Kinderszenen (“Scenes from Childhood”).
You hear his voice again in his larger compositions, like the third movement of his Second Symphony.

And so clearly in the sublime second movement of his Opus 80 Piano Trio.

Schumann was a very troubled man and every piece that he wrote, large or small, well composed or less so, became what I would call not just a piece of music, but a human document. So he sits at one end of the scale that runs from pure music to human document.
Daniel Francois Auber, Composer of Pure Music
On the other side of the scale we find music that is skillfully “screwed together,” but which reveals next to nothing about the mind or emotions of the composer who created it.
Which composers created almost entirely pure music? One of the first who comes to mind is Daniel Francois Auber, a popular opera composer of the nineteenth century. The overture to his opera La Muette dei Portici is a good example. It’s entertaining, it’s lacquered skillfully on the surface, yet it’s not at all profound.
Placing Composers on the Scale
I’d suggest that top-notch music contains elements of both – that it functions both as human document and as pure music.
Here’s a Venn Diagram that illustrates the theory: 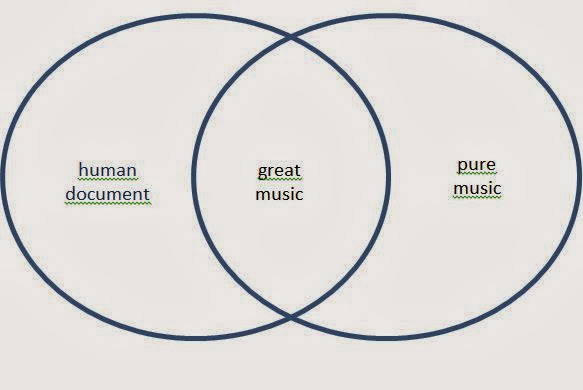 As soon as you start to consider the work of individual composers and where they fit on the diagram,  it gets complicated:
Let’s look at some major composers and try to place them on the scale.
Felix Mendelssohn –He is often accused of writing lightweight music. In other words, that his music lacks depth. That’s bunk. Many of his compositions are both profound human documents and masterfully composed pure music too.
Mendelssohn’s opus 20 Octet is an ideal example of a commanding work that functions in both ways. He wrote it when he was only seventeen, and it documents a mind electrified by youthful enthusiasm and optimism. Yet it is also beautifully composed and functions as enthralling, pure music too.
However, we also have to admit that a certain number of Mendelssohn’s compositions skate the surface and fail to resonate on the deeper emotional levels. One example is the third movement of his first Piano Concerto. It’s an entertaining virtuoso showpiece for sure, but what does it tell us about Mendelssohn’s inner thoughts or moods, or about our own?
Rating: About 80% of Mendelssohn’s output is great music that falls into the center part of the Venn Diagram.
Wolfgang Amadeus Mozart – It would be tempting to say that everything Mozart wrote is perfectly balanced, and must therefore function as pure music and human document at the same time. But it’s more complicated than that. Some of Mozart’s early symphonies, which he composed before the age of ten, are pretty fluffy, unformed stuff that aren’t profound human documents. Hey, he was only wetting his chops, right? Yet we also have to notice that when the adult Mozart was only trying to compose entertaining music, he had a hard time doing that. Something of his inner voice and mind was bound to emerge.
You can hear that balance in even a simple piece that was meant to entertain, like the K. 136 Divertimentofor strings.
Rating: About 85% of Mozart’s output is great music that falls into the center part of the Venn Diagram.
Maurice Ravel – The vast majority of his output clearly reveals the voice of this troubled man. Yet his work is almost always meticulously crafted.
The first movement of his String Quartet in F Major (the only string quartet that he composed, as you know) fills the bill perfectly, offering insight into the emotions of this wonderful, complex human being and also showcasing his extraordinary attention to compositional detail. The same can be said for his ravishingly beautiful Piano Trio and most everything that he wrote.
Rating: About 90% of Ravel’s output is great music that falls into the center part of the Venn Diagram.
Rating Composers on the Scale
What about Bach, Beethoven, Schubert, Clementi, Stravinsky, or Ives? Where do they fall on the scale that lies between human document and pure music?
And then we come to Mahler, who poses a particular problem. His voice is always so overwhelmingly present that he seems to destroy the paradigm that I’m talking about. Sometimes it is hard to hear his music because we are hearing him so much. Does that mean that he wasn’t a good composer? I don’t think so. Does that mean that his work will forever displease or offend a higher percentage of listeners than does, say, the music of Haydn, von Suppe, or Hindemith? Could be. Maybe in order to profoundly move some listeners, a composer has to risk offending a certain number of people in the audience.
Listening to classical music is doggone interesting, right?